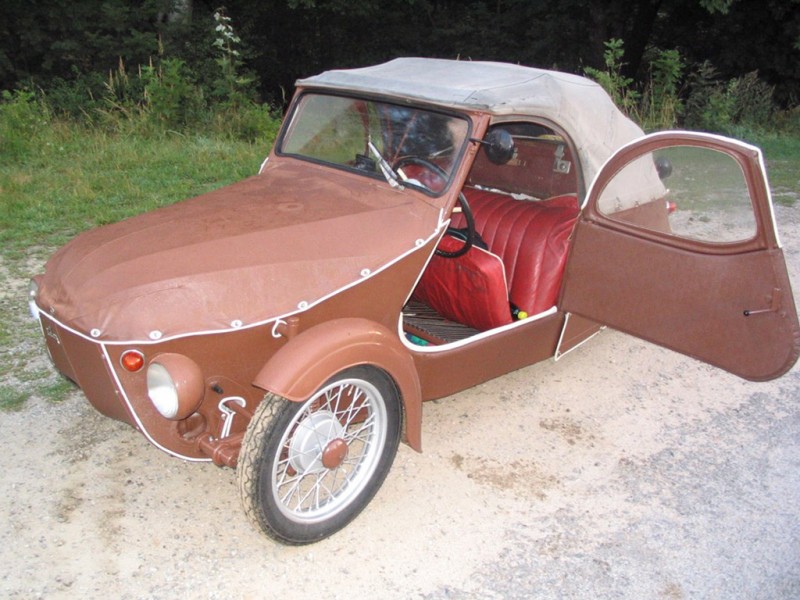 The Velorex was a three wheel micro car, constructed on tubular steel space frame, The bodywork was made from vinyl, stretched over the frame and fixed with turn-button fasteners.  Power was from a two stroke Jawa motor cycle engine, with earlier cars having a 250cc single or twin cylinder engines, while later models boasted 350cc twins and were capable of about 85 km/h.

Built by the Velorex manufacturing company in Czechoslovakia, the design was apparently inspired by pre-war Morgan three wheelers. Post war car production in Czechoslovakia was very limited, so when the Velorex was released in 1950 at a quarter of the price of a standard car, it was much in demand. They remained popular for 20 years with production finally ceasing in 1971 when about 15,000 had been made. About half of that output was exported to other Eastern Bloc countries.

They appeared to drive reasonably well, particularly when compared to some other micro cars of the time. This no doubt explains the longevity of the model, along with the general shortage of motor vehicles behind the Iron Curtain – the people’s mobile tent! 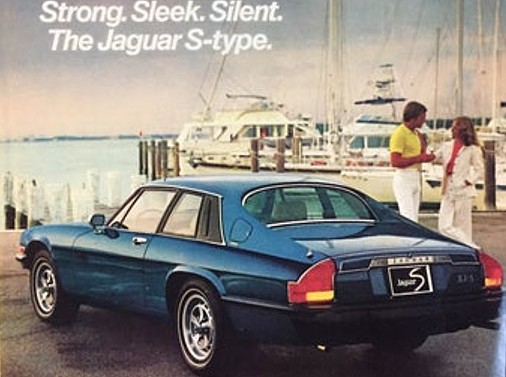 In February 1985 a Jaguar XJS rolled off the Browns Lane production line. The car was destined to come to New Zealand  11 years later, and ultimately  join the Classic Rides fleet.

During its first decade in the UK it was clearly a well used car, clocking up almost 10,000 miles a year. Not surprising if you consider the pleasure of driving it – in the opinion of Motor Magazine back then: “the finest means yet devised in which to travel by road.”

That pleasure can still be experienced 35 years later, The Big Cat is available for hire from  Classic Rides.

Also February 1985 saw the passing of Sir William Lyons at age 83, founder of Jaguar Cars, and a giant of the British motor industry. With particular ability as a stylist, cars he personally supervised included the XK 120, E Type, 3.8 saloon and the original XJ6.

Toyota launched the MR2 in Europe at the beginning of the year. MotorSport magazine said: “Toyota has built an extraordinary motor car, the car MG or Triumph should have been allowed to build.”

At the other end of the motoring spectrum, the Sinclair C5 electric trike went on sale in the UK January 1985. It was sold by electrical appliance stores through a deal with Hoover who built it for Sinclair Vehicles. It initially cost £400 with 100,000 units a year planned. An idea before it’s time and not a great success, less than 9,000 were sold when production ceased 8 months later. Perhaps doing only 15 mph with a range of 24 miles was part of the problem.

In October 1985, the TWR Jaguar XJS team finished 1st and 3rd in the James Hardie 1000 on the Mount Panorama circuit

The 1885 Formula One championship was won by Alain Prost driving a McLaren. McLaren also won the constructors championship.

In 1954 BMW was struggling to survive and looking for a product to generate much needed cashflow. With the boom in micro cars underway, this looked like the answer.

A licence to build the Isetta was purchased from Iso in Italy, along with complete body tooling, enabling  a rapid start up. However BMW applied their own engineering expertise, replacing the noisy two stroke with a 250cc four stroke OHV BMW motorcycle motor, and an all-indirect four speed gearbox. This delivered 12 bhp and a top speed of 85 km/h (53 mph), although it took at least 40 seconds to get there from standstill.

Sales continued to be strong, making a considerable contribution to the company health. In Germany the BMW Isetta became affectionately known as “das rollende ei” the rolling egg. Production continued until 1962, by which time more than more than 160,000 had been sold. So it would be fair to say that without the intervention of a rolling egg, BMW might not exist today. 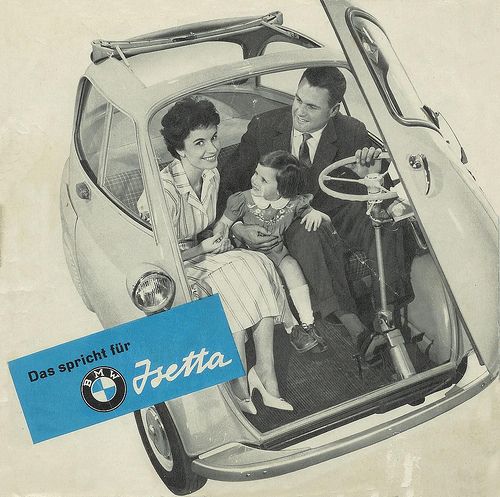 This is a publicity photo of the Friskysport, just prior to its debut at the Earls Court Motor Show in October 1957. It was built by Henry Meadows Ltd in Wolverhampton, UK, with the body designed by Giovanni Micholotti – whose designs included various Ferraris, Maseratis and Alfa Romeos, and the Triumph TR4, Spitfire, Stag and 2000. So the Friskysport was in classy company!
It was powered by a rear mounted Villiers 324cc two stoke engine, with top speed around 65 mph (105 k/h). Unlike many micro cars of the time, the Friskysport actually had 4 wheels, although the rear track was some 16 inches (40 cm) narrower than the front. By all accounts it was a reasonably competent vehicle, but the high price of 495 pounds was a factor in the low sales achieved. In 1957 the same amount would also buy a new Austin A35, or a good second hand MG or Morgan.
Production ceased in 1961; and according to the Frisky Register only about 12 are known to exist today. 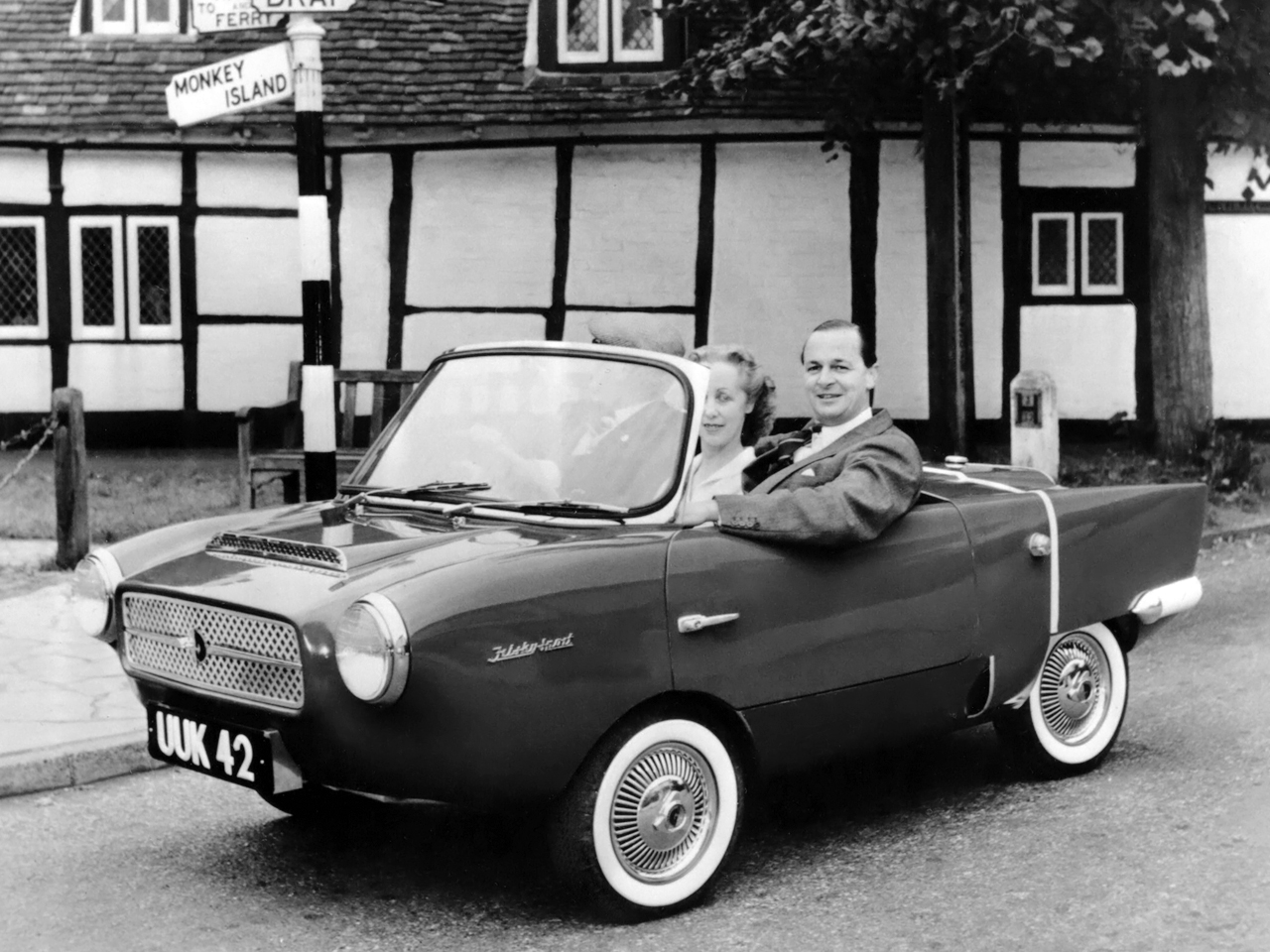 If you are in Wellington, spend time in the Wairarapa with a classic car – without having to drive over the Remutaka Hill.
Catch the Wairarapa train in the morning and we will meet you at Carterton station and take you to Classic Rides to collect your car
Spend the rest of the day however you wish, and we will get you back to the station for a relaxing ride back to Wellington.
If you want to stay longer, we can help with finding accommodation too.